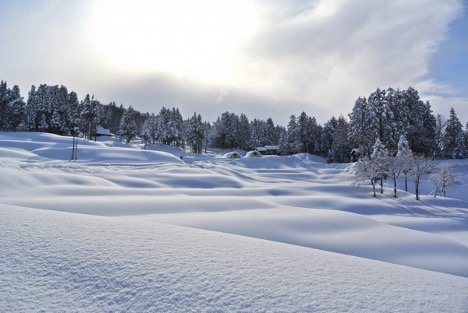 Some people like to play in it, although I’ve never been a huge fan myself. During the 11 years I lived in Vermont, arguably the capital of the North American ski world, I never once dared to go downhill skiing, although I dabbled in cross country skiing a bit.

I grew up beside the Pacific Ocean and thus snow was, well, a fleeting thing. We tended to get a small (4-6 cm) snowfall in November that lasted about 3 days, and another in January that was about the same. Once every few years we got a massive dumping of snow – one year it was over a foot – but none of us were really prepared for that so we didn’t plan to do much with it.

Yet I love to look at snow. It seems calming, gentling. As I gaze out my window at snow-covered trees and beyond that a few buildings, I sense that things are a bit quieter. Folks who are out walking in it seem kinder and friendlier. I know, that’s subjective, because I am quite sure that at this very moment some of them are muttering and stammering about having to scrape the windshields of their cars or shovel the darned stuff just so they can walk a few steps. But when we’re not threatened by it or needing to process the stuff, it’s quite beautiful.

Maybe that’s a big piece of it. Maybe snow is God’s way of saying, “slow down. Take it easy. Stay by the fire.” We cannot all do that. But when we do, we might find ourselves calming down a little and taking life a bit more easily. And that’s a good thing.